Currently, we can only ship to the United States, sorry for the inconvenience

In this article, seven chakras will describe the meanings of life and meditation. Understanding the nature of the Chakras is fundamental to learning background, as we meditate and to make the best of the energy that resides within us. Chakra is a word that comes from Sanskrit, an ancient language spoken by the Indian populations of Asia and also used to write the oldest texts of their literature, the Vedas. The Chakras would then be united to the different aspects of man (mental, emotional, ethereal …) through a series of channels called Nadis, of the energy highways.

But within this set, there are the 7 basic or main chakras that have distributed from the lower part of the vertebral column, where the kundalinî (tangled snake-shaped energy, which must be awakened), is found up to the highest part of the head. If the energy has fully developed, what we call halo would appear. The energy would flow through these channels with ascending and descending movements, forming a kind of spiral, turning like a wheel. Of these seven chakras, the lower and upper chambers are simple, while the remaining five are composed of an anterior part and its corresponding posterior part.

Below I will describe each of the chakras with some of their most-used meanings and characteristics, as well as some diseases and psychological ailments that could be caused by the bad balance of each chakra:

The root chakra is located in the perineum and controls different parts of the body such as the nose, the sense of smell, the lymphatic system, the bone system, the prostate, and the lower extremities. It gets associated with the color red.

The main consequences of the malfunction of the root chakra are shyness, guilt, discomfort, fear of facing life, distrust, distraction, great dependence on material goods, etc.

You can open this chakra by walking (e.g. by walking meditation), by doing aerobic exercises, by flexing the trunk until touching the toes while sitting, by doing dance or dance exercises, jumping on the spot, doing exercises, practicing yoga, etc. that enhances confidence in you.

The splenic or orange chakra is positioned in the center of the abdomen and is related to the sexual organs, the reproductive system, and the lumbar plexus.

The consequences of the malfunctioning of the splenic chakra are sexual repressions, fear of enjoyment, contempt for sex, and energy blockages that limit the expression of one’s personality.

To activate this chakra you can dedicate yourself to some exercises such as swimming, treat yourself to long baths, showers, a little relaxation in a jacuzzi tub, or even with dances or dances that involve movements and rotations of the pelvis, closely related to sexual relations. 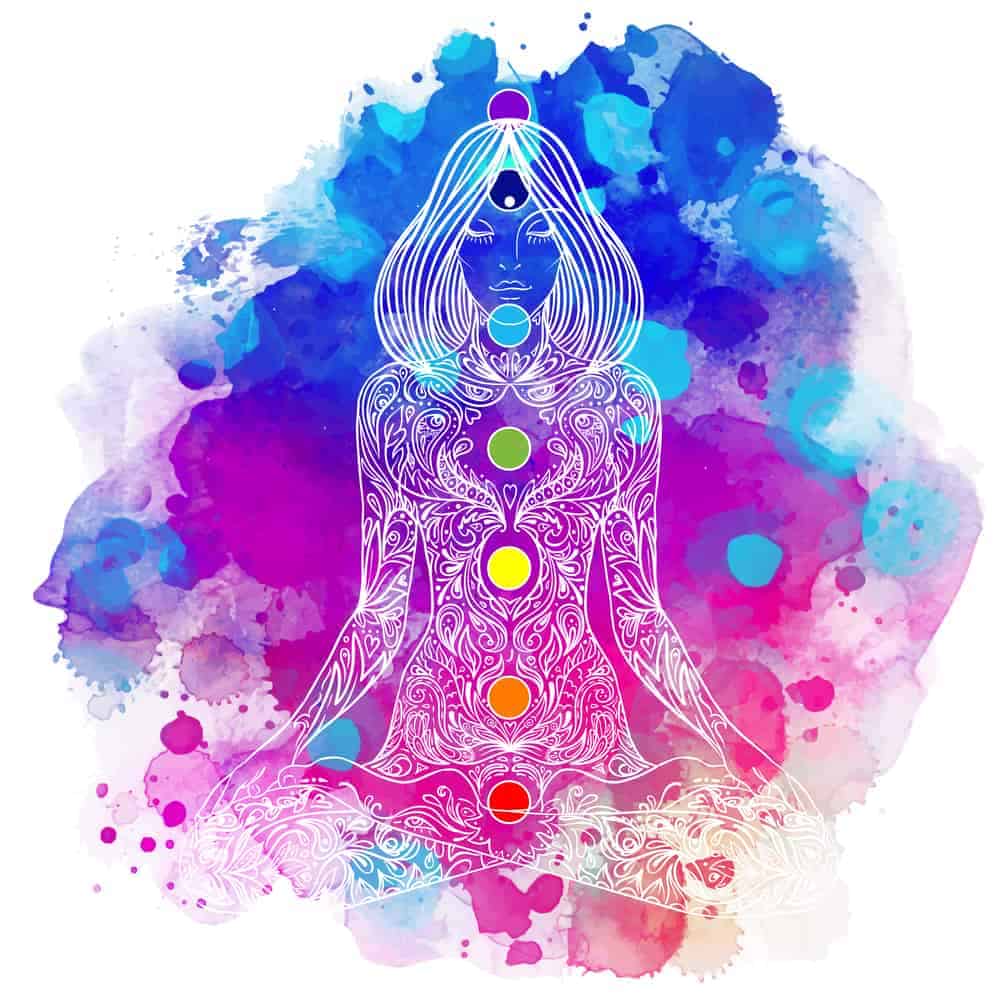 The solar plexus chakra is located, as its name says, in the solar plexus. It is also related to the eyes, eyesight, and facial muscles.

If your solar plexus chakra is malfunctioning, you may have problems such as excess weight in the abdomen, digestive tract diseases, acidity, ulcers, addiction to stimulants, chronic fatigue, selfishness, personal dissatisfaction, a sense of inferiority, guilt, dependence on power, egocentrism, etc.

The heart chakra is located in the center of your chest, controlling the heart, circulatory system, lungs, heart plexus, and the entire chest area. It is associated with the color green.

The consequences of the malfunction of the heart chakra are the inability to love, respiratory and heart diseases, selfishness, disconnection, and isolation.

The throat chakra is located at the base of the throat controlling the neck, throat, hands, and arms. It associates with the bronchial or cervical plexus and corresponds to the blue color.

A malfunction of this chakra can give rise to problems of voice, throat, vocal cords, communication, malfunction of the thyroid gland, and the need to speak a lot, or on the contrary fear of speaking to avoid problems.

This mystic name purple chakra is located in the center of the forehead and is associated with the temples, the carotid plexus and of course the forehead.

The malfunction of this chakra could cause hallucinations, psychological problems, vision problems, frequent migraines, and states of mental confusion.

Problems with this chakra can cause the need to dominate and manipulate others to get what you want, the fact of always wanting to be right, arrogance, and independent.

Meditate with Crystals to Attain Your Soul’s Pureness

The Ultimate Chakra Meditation to Active Each of Your 7 Chakras